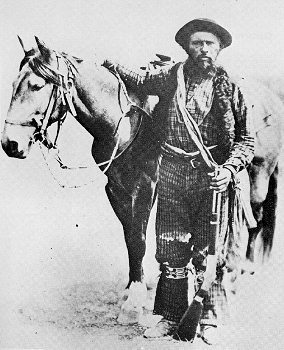 Gabriel Dumont is best known as the man who led the small Métis military forces during the Northwest
Resistance of 1885.  He was born in the Red River area in 1837, the son of Isidore Dumont, a Métis hunter,
and Louise Laframboise.

Although unable to read or write, Dumont could speak six languages and was highly adept at the essential skills
of the plains: horseback riding and marksmanship.  These abilities made Dumont a natural leader in the large
annual Buffalo hunts that were an important part of Métis culture.  At the age of fourteen Dumont received his
initiation in plains warfare when he took part in a Métis skirmish with a large group of Sioux at the Grand Coteau
of the Missouri River.

By the 1860s, Dumont was the leader of a group of hunters living in the Fort Carlton area.  In 1872, he took
advantage of the growing traffic on the Carlton trail and opened a ferry across the South Saskatchewan River
and a small store upstream from Batoche.  In 1873, his position as a leader was formalized when he was elected
as president of the short-lived local government created by the Metis living on the south branch of the Saskatchewan.

His leadership role in the South Branch community continued. In 1877 and 1878, Dumont chaired meetings which
drew up petitions to the federal government asking for representation on the Territorial Council, farming assistance,
schools, land grants, and title to already occupied lands. Dumont was also a member of the delegation, which
convinced Louis Riel to return to Canada and plead the Métis case to the federal government.

When a provisional government was declared in 1885, Dumont was named "adjutant general of the Métis people."  He proved himself an able commander and his
tiny army experienced some success against government forces at Duck Lake and Fish Creek.  The Canadian militia, however, proved too large and too well
equipped for Dumont's army, which collapsed on 12 May 1885 after a four-day battle near Batoche.

Dumont avoided capture by escaping to the United States where, in 1886, he accepted an offer to demonstrate his marksmanship by performing in Buffalo Bill Cody's
Wild West Show.  After visits to Quebec (where he dictated his memoires in 1889), Dumont returned to his old homestead near Batoche.  He lived there quietly until
his death in 1906.